So this is a cake that looks like a leg in a cast. 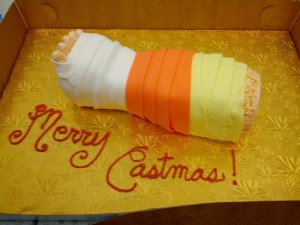 This one is  little hard to explain as it crosses 2 major holidays and is super random.  In October, a co-worker of mine (who I really love) broke his ankle pretty heinously and was laid up in the hospital then at home for close to 3 months.   While he was in the hospital, the crazy insane-os I work with created a Facebook page for us to keep him in good spirits and post really silly pics of his leg that we photoshopped called  The Ankle Diaries.

Because it was Halloween, he had a candy corn cast at one point, so when he came back to work in December, I wanted to make sure there was something really twisted waiting for him.  The first opportunity I had was out department holiday party today.

I think the funniest thing about this cake is that there is a strawberry roll “bone” running through it where the femur would be.  I wish I had a picture of it cut open because it reminded me of a slice of ham with the bone-in. Super yucky. 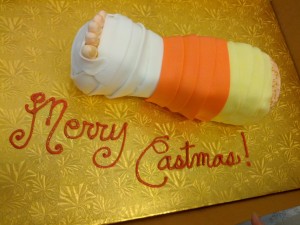 Aside from the bone, the leg hairs were a nice touch.  I think the toes came out a little freaky and unnaturally angled (I mean, come on– I’m working with fondant and toothpicks here.).  Anyway, today I made my co-worker eat his toes, and it was hilarious and gross all at once.  The cake is a yellow butter cake, in case you’re curious.  Merry Castmas, everyone.