Delivery is WELL underway.  Boxes were taken to work and handed out, and the first wave of shipping happened today.  All I gotta say is, Potsie is CLUTCH.

I can always count on my family to help me, that’s a given, but even with that, there are limits on what I would actually ask someone to do, due to my Asian guilt.  You just don’t ASK someone to overextend for you.  It’s bad enough MOTU seems to like helping me decorate.  I’d never ask her to do this, nor would I be mad if she didn’t help me next year.  It’s MY madness and I don’t expect anyone (well, except maybe The Husband) to help me at all.  Probably why he starts getting noticeably mad at me on day 3 and it just builds up until all the boxes are out of the house…

But back to Potsie and why she’s so fetch.  Dude, she mailed out 15 boxes for me today.  As in, took them to the post office, waited in that hellish line, and paid for them (I of course promptly paid her back!).  It floored me that she was willing to do that, and did it with a smile.  It’s not that I myself wouldn’t do that for someone I loved, but man, I just really don’t expect anyone to do this kind of thing for me.  It humbles me every time and I never know WHY someone would do something so kind for me.

I know that’s a “me” problem and some of you might be like, “So what, she mailed some boxes?”, but to me, it’s everything.   She helped me get my boxes out a bit earlier than I thought they would go (I would have had to take them at night, to Office Depot after work), and she did recon for next year.  Like I said, 11th hour, and totally clutch.

We did a total of 93 big boxes.  I totally screwed up and when copying my cookie list, mistakenly copied about 10 people 2x so yeah…no math gene here.  We have tons of cookies. 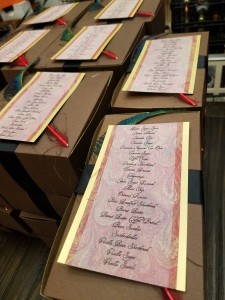 I took as much as I could carry in to work today and made a cookie buffet for the department.  I mailed more off than I planned and some of my friends will get a nice surprise real soon, out of the blue.  Which I love.  I really like surprising people with something amazing and unexpected.

I think tomorrow might be the first night I get a good night’s rest and I can’t wait.  I’m so tired.  And I’ve still got some Christmas shopping to do.  I wish some of these winter holidays would get spread out over the year so there isn’t so much to do in October, November and December.  All the fun stuff gets crammed into 3 months.  It’s just not balanced.  I want to wear a costume to work in May…I guess nothing is stopping me…