The minute I heard about the cronut,I was…well, smitten.

I mean, who doesn’t want to eat a buttery croissant, deep-fried, glazed, stuffed with cream? *drool* I pity the fool who thinks this sounds disgusting. I don’t mean to judge, but you kind of suck, lol.

Anyway, I have yet to taste one, and until that glorious day, I must live in my imagination.  Which is where the Cro-Pie-Cake was born.

Every year, the company I work for has this fabulous Thanksgiving lunch for us, and there’s usually a dessert contest attached.  This year, one of the stipulations was that we had to make cupcakes if we wanted to enter.  Priding myself on being a “real cake” kind of girl, cupcakes admittedly made me go “BOOOOOO” inside, but what the heck– it was only 12.  I can do that. And, I’m a participator.  I can’t NOT do a dessert for these contests

In the past, I’d done some messed up things, since I’m a bit of a sick-o and it IS Thanksgiving.  The turkey cakes are always a big hit.   The first year, I did a cake in the shape of a cooked turkey.  It had dark & light meat (chocolate & white cake) and I made a coffee-caramel “gravy” on the side: 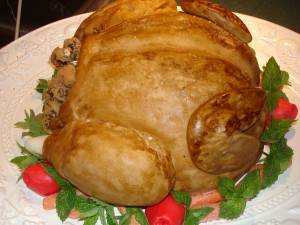 I followed up the turkey cake with what has affectionately become known as the “Turkey Graveyard”.  It was a group of sad/horrified/shocked turkey cupcakes all standing around a mini cooked turkey.  The Husband came up with the concept, and I slapped the “Eat Ham” plea on it: 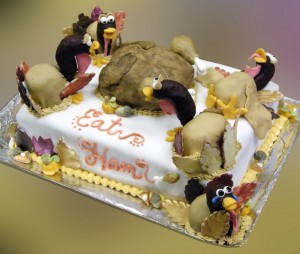 I busted out croissant dough 2 days before the contest, and the night before, I made my yellow cake batter and apple pie filling.  Assembly was a little tight.  I filled the cupcake liners only about 1/4 full, let them bake until they could support the weight if the filling, then spooned in the apple and covered it up with a slice of croissant: 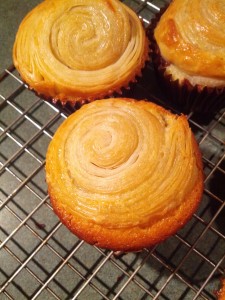 Man, these little buggers were good.  Flaky, buttery goodness with warm apple pie filling lodged in a soft, butter cake.  God damn.  Anyway, several names were tossed around (Poissantcake, piecrocake, cakesantpie) but Cro-Pie-Cake just works.  I think you could do different flavor combos– a Boston Cream Pie version sounds amazing– and it’s really the timing that’s a bit hard, or the filling mixes in with the cake batter.

So I may still be lusting after a box of cronuts, but in the meantime, I’ve got the turducken of the baking world…